Krista Reese’s book on Elvis Costello – “The First Book on One of Rock’s Most Private Personalities”, the back cover promises – is prefaced with the following cheery letter of encouragement from Jake Riviera, Costello’s then manager and former boss of Stiff Records:

I would like to notify you that I will do everything in my power to prevent you from writing a book about Elvis Costello. . .If you plunder from [press articles about Costello]. . .I shall vigorously assist the publishers of these articles in nailing you and your publishing company to the wall. . .If this matter goes any further I shall pop in for a visit when I am next in New York.

The very existence of my copy suggests Riviera’s bark was worse than his bite, but American journalist Reese nevertheless takes the precaution of subtitling her work A Completely False Biography Based on Rumor, Innuendo and Lies. The book might better be described as A Piece of Routine Hackwork Utterly Reliant on Press Cuttings but Still Enlivened by the Occasional Glimmer of Critical Insight.

At the time Elvis Costello appeared, its subject was approaching a significant point in his career. He’d just released the magnificent Trust, which is dealt with in the final pages of the book, and was at that time rumoured to be working on a country album. The album eventually became the covers LP Almost Blue, released in the autumn of 1981.

The Costello of Reese’s book is not the hat-wearing sophisticate and occasional TV host of the present day, but the nervy, confrontational frontman of a fired-up new wave band. Have a look at this six-minute version of ‘Watching the Detectives’ from German TV in 1978 for a reminder.

There is sweat. There is feedback. And there is almost certainly an argument waiting to happen with a hapless local journalist who, shortly after the show has been taped, will make the mistake of asking Costello the wrong question. 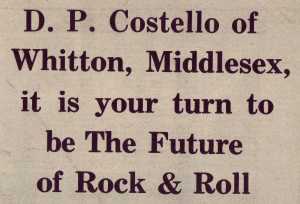 The headline from a lengthy Costello interview with Nick Kent in the NME, 27 August 1977. Reese reminds us that this piece appeared in the same week that the paper was reporting the death of the other Elvis.

Costello’s tetchy relationship and sometimes complete refusal to engage with the music press is a running theme of the book. For a biography without direct access to its subject, and which therefore relies for much of its content on press cuttings, this is a problem. It also serves as a reminder of how difficult it could be in the pre-internet age to find reliable information about your favourite musician. Costello was five albums into his career by the time this biography appeared, which makes statements in the book such as “Details of Elvis’s early life are scarce” and “No dates are given for [The Attractions’] formation” all the more remarkable. In the place of facts, we get reviews and opinions from the likes of the Austin American-Statesman and the Minneapolis Tribune.

Errors and Americanisms in the book leap out at the English reader with equal force. No live music fan of long-standing would ever refer to the Marquee as merely “a local club”. The flat near Westbourne Groove inhabited by several individuals vital to the story of Stiff Records is apparently located “on London’s West Side”. And Poly Styrene’s band is misspelled throughout as “X-Ray Specs”.

But the book provides interesting detail on some of the controversies Costello found himself involved in – or provoked, if you prefer – in America during this early part of his career. On a 1977 Saturday Night Live, The Attractions displeased their hosts by abruptly changing mid-song from ‘Less than Zero’ to ‘Radio, Radio’, a song tailor-made to irk their corporate hosts. Reese, who may even have been watching the original transmission, details the action. To see what all the fuss was about, have a look here.

There are also several pages on Costello’s argument or fight (contemporary accounts differ) with Stephen Stills and colleagues late at night at the Columbus Holiday Inn in spring 1979. On this occasion, Costello appears to have done all he could to provoke Stills and friends by being crassly offensive about Americans, and Ray Charles and James Brown in particular. Reese follows the story through to a hastily-arranged press conference held shortly afterwards at the CBS Building in New York where Costello attempts to justify what he did by saying he’d been “‘trying to outrage these people with. . .the most obnoxious and offensive remarks that [he] could muster’”. She notes the disbelief some reporters afforded Costello’s explanations at the conference, and records the NME’s subsequent defence of the singer:

According to their account, the story (which they protested was tattled by that bunch of stool pigeons, the Stills entourage) appeared “the very next day” in “every much-raking newspaper on the East Coast.” The account also attributed part of the flak at the news conference to “the presence of some black journalists.”

As the last point in her summary of possible reasons for Costello’s outburst, Reese goes on to say:

Others who’ve had more exposure to British culture say that a comment like that [ie Costello’s alleged racism] would raise no controversy in England, where published quotes that would be viewed as poisonously racist here are printed without a qualm.

In the context of Morrissey’s court action (recently settled at the time of writing) against the charges of racism levelled at him by none other than the NME, this is an eye-opening point of view, to say the least.

(From the book) Costello and Attraction on Top of the Pops, 1978.

Reese’s own analyses of Costello and the Attractions have stood the test of time rather better. She writes of the “sissy organ” Steve Nieve contributes to the early material, “which would seem to defuse whatever real defiance that might come from the songs,” and the “awkward sputtering and stutters” of Pete Thomas’s drumming, which mimic “some of the character of Costello himself”. And this is her sharp take on a photo in the elaborate packaging of the Armed Forces LP:

There’s a marvellous picture inside, showing Elvis draped over the diving board of a lush Palm Springs pool, his hands dangling from the sleeves of another suit of drab, thick cloth. His white socks glaring in the sunlight, he is a splotch of dread invading Eden’s calm.

Trust-era Elvis: The baize of glory.

For the fanatics, the book also contains a whole chapter on Jo Marshall, the American singer whom Jake Riviera heard and invited to London to stay and write with Costello and the Stiff crowd in 1979. The visit didn’t yield a record deal or album and Marshall returned to the States, but the two songs Costello wrote and demoed for her, ‘Mighty Man’ and ‘True Love’, live on as bootlegs.

Costello’s oeuvre is so vast and fascinating that I’m happy to read almost any account of it. As its subtitle suggests, Elvis Costello is quirky and indeed not wholly reliable. But as a snapshot of the performer’s early career, it’ll do.

Jake Riviera’s thoughts about the finished book, on the other hand, have not been preserved.