The Tale of Willy’s Rats by Mick Farren

In a 2005 article in The Independent, D J Taylor considered why there were so few novels – and particularly so few decent novels – about the music business. In among those he singled out, he described The Tale of Willy’s Rats by musician and NME journalist Mick Farren as “a horribly authentic piece of reportage from the back-seats of the late 1960s tour-bus.”

Intrigued by Taylor’s backhanded compliment, I searched for more information about the novel and found plenty of references to it, but curiously very little detail about its content. Its title crops up in an interview Tony James and Mick Jones gave to The Times in 2007 about their Carbon/Silicon collaboration: when the two of them first met in the days before Generation X and The Clash, they’d been delighted to discover that they were both reading The Tale of Willy’s Rats. At one time you could also read the novel in its entirety online with a new introduction from the author, although sadly this link no longer appears to work.

Farren commented in the new introduction that he’d commenced writing the book “with the intention of honing [his] still pretty formative chops on a piece of pulp fiction that, instead of concerning itself [with] sleazy spies, or private eyes, and women in high heels, would chronicle the adventures of a sleazy rock & roll band and women in high heels.” Unfortunately, this is pretty much the extent of Farren’s recollections, as he also acknowledges that even he hadn’t read the book for many years. 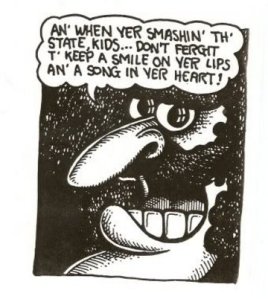 Revolution, Farren-style: The author pictured in his 1972 book Watch Out Kids, a collaboration with artist Edward Barker.

The novel is the story of Lou Francis’s ascent to rock stardom, from suburban art school beat group beginnings, to busking across the West Country (“doing the Woody Guthrie thing”) and a crucial meeting with a guitarist called Jerry. Back in London, the two of them recruit some like-minded souls to form Uncle Dooley’s Blues Band. The band enjoys some small-time success but things don’t really take off until they meet Jimmy di Angelo, a manager who combines the people skills of Don Arden with the charm of Phil Spector. Di Angelo wants to work with the band, but insists on changing both their line-up and their name. The latter request provokes much head-scratching until Jerry comes up with Willy’s Rats, citing William S. Burroughs’ The Naked Lunch as the source. The name is a reference to the character Uranian Willy, the Heavy Metal Kid, who appears in various places in Burroughs’ work (including a whole chapter in The Soft Machine) and who is also known as Willy the Rat.

Under di Angelo’s guidance, the band records their debut single. During an interview to promote it with Disc magazine, the discussion turns to the rock revolution of the late sixties and how it has exposed thoughts and feelings considered taboo by the previous generation. Lou tries to explain what it is that defines Willy’s Rats:

‘I guess it’s something like voodoo, a chance for people to get their rocks off behind these bits of weirdness, to bring out all their nasties in a way that nobody will get hurt. You know what I mean?’

The reporter, who had been scribbling furiously in his little book, looked up and nodded. He didn’t look as though he’d understood a word. Jerry decided to throw his bit in.

‘I suppose we let people be evil by proxy.’

We were going to hear that quoted a great deal over the next couple of years.

This is the point at which Willy’s Rats performances become more outrageous and more aggressive, their popularity booming as a result, while their off-stage lives are dominated by the consumption of drugs and increasingly weird sex. There are prodigious quantities of both activities in the book, and it’s difficult to imagine any of the book’s main characters waking up without a headache, a dry mouth and an itchy scrotum at best.

Mick Farren is unusual in having combined the careers of musician (as singer with The Social Deviants), journalist (initially for the underground press before the NME) and author of fiction in many forms. Around the time he was writing Willy’s Rats he was also churning out erotic stories for men’s magazines under pseudonyms, and he’s the author of numerous works of science fiction. The combination of Farren’s diverse talents and experiences are apparent in the novel, and to take just one example, the book is very strong on sixties period detail. Farren started work on the book in 1973, and there’s an appropriate freshness to his descriptions of, for example, the décor of a groovy West London terrace flat at the end of the previous decade, its walls hung with “big Indiacraft cotton bedspreads, all except a couple of sections of wall that were painted a kind of deep burgundy and covered with pictures from Vogue and the Sunday supplements”. Farren is sharp too on the dynamics of the crowd at a gig and the relationship the audience and band create each night. Lou’s story is intercut with scenes from the concert which is the focus of the novel’s conclusion, and at one point when spotlights shine on the crowd, the sight of so many arms raised aloft is likened to “a sea anemone reaching for its dinner.” 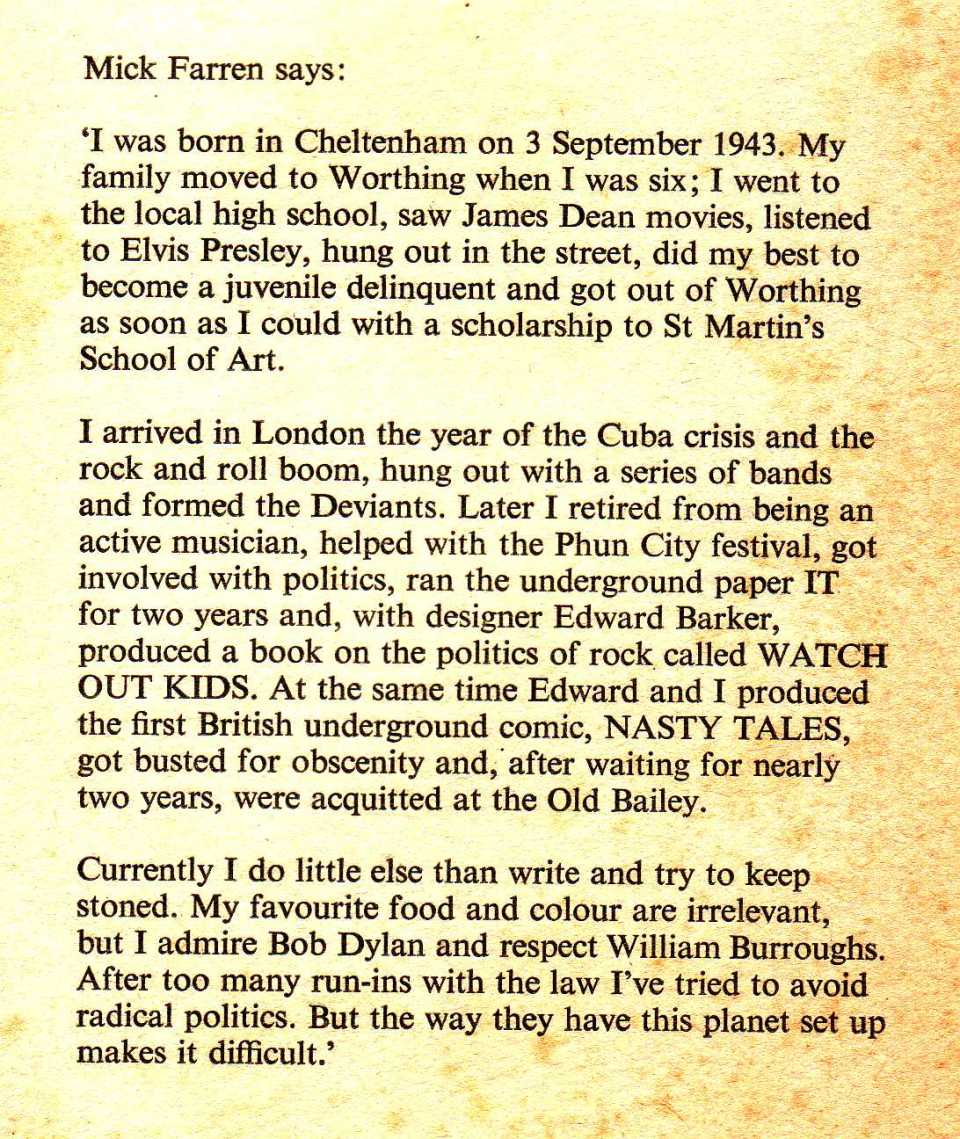 (From the book) ‘So, tell us why you want this job, Mr Farren?’: The author’s biography.

Towards the end of the book, the music becomes an adjunct to the business of drug-taking and shagging, and the literary experience suffers as a result. For the members of the band, paranoia sets in and, deciding they can no longer trust Jimmy, they jettison him for a big-time American manager. On a tour of the US, the text fragments into snippets of conversations about star signs, CIA plots and weirdos on the streets. And it’s in America that guns make a decisive entry to the scene – the novel ends with a crazed member of the crowd trying (and failing) to shoot Lou. This is what all the fame and adulation has resulted in: a warped expression of what Lou describes as “the unimaginable importance that people attach to rock and roll musicians.”

Back cover blurb: To the point.

In spite of its deficiencies as it nears a conclusion, The Tale of Willy’s Rats remains highly readable. Perhaps its most obvious descendant in the line of rock novels is Kevin Sampson’s Powder (1999), itself highly acclaimed, which deals confidently with the sex, drugs and rock’n’roll of the Britpop period. In particular, James Love, the guitarist in Sampson’s fictional band The Grams, is a sexual adventurer of a type very similar to Jerry in Willy’s Rats.

To finish, here’s a clip that combines Mick Farren, rock’n’roll and William S. Burroughs. In September 1969, Farren’s band The Deviants shared a bill with The Soft Machine, among other groups, at a free concert in Hyde Park. Shortcomings in sound and picture quality make the clip quite heavy going, but if you can bear it, allow yourself a few minutes to wallow in some horrible authenticity.