Tom Jones: Biography of a Great Star by Peter Jones

A few weeks ago on his Radio 2 weekend programme, Terry Wogan cued up the song ‘Sex Bomb’, Tom Jones’s saucy collaboration with producer Mousse T. The number appeared in the running order immediately after a trailer for a documentary about David Bowie’s ‘Starman’ and the accompanying era of British glamour and androgyny the 1972 song had heralded. The contrast between the gender-bending Bowie and the testosterone-charged Jones wasn’t lost on Wogan. “Here is someone,” the presenter deadpanned over the start of the record, “who could never be called androgynous.”

I was reminded of this as I read Peter Jones’s 1970 biography of his namesake Tom. The author was editor of Record Mirror from 1963 until the early 1970s and is probably best known as the journalist who first encouraged Andrew Loog Oldham to go and see an unsigned Rolling Stones at the Crawdaddy Club in Richmond. (“Peter Jones was the conduit to my destiny,” Loog Oldham declared in Stoned, the first volume of his autobiography). But for all the author’s undoubted significance – and in next month’s entry to the Library, I’ll be looking at a much more interesting, though little remembered, project of his from the early 1970s – this biography reads as nothing so much as an overheated press release from Tom Jones’s management team.

Most of the ‘heat’ in the book is generated by the author’s insistent reminders of Tom Jones’s attractiveness to women. Worse than that, the entire biography has the tangy odour of the locker room hanging over it. The first chapter is entitled ‘Why Pop Music Needed a Real Man’, and explains that Tom was the one who had:

grabbed pop music, then in the grip of long-haired and effeminate-looking groups. . .grabbed it by the scruff of the neck and didn’t let go.

Having shaken it up, he injected virility, toughness, roughness and sheer unadulterated sex.

We learn that Jones “crashed manfully” into the charts in 1965, is “super-confident in his own masculinity”, and when the recording of ‘What’s New Pussycat?’ brought him into contact with Burt Bacharach, the two hit it off because “both are very much men’s men”. And these are not isolated examples; the whole book seems to be written as a tribute to Tom’s testosterone. The effect on me as I read this was that the more the one Jones insisted on the other Jones’s manliness, the greater was my sympathy for the long-haired and effeminate-looking acts Tom was replacing.

The biography takes us from Jones’s first bookings as a singer in the pubs and clubs of the South Wales Valleys to the start of his budget-busting ATV series, which was shown on both sides of the Atlantic. When Tom was a coach in the first series of The Voice last year it became a running joke that he would take any opportunity to drop in references to his meetings with Elvis, but the book is a reminder as to how much of a star he really was, with Frank Sinatra and Sammy Davis Jr as well as Presley quoted as fans. The persistent image of Jones as the target of hurled underwear has had the unfortunate effect of obscuring his brilliance as a performer, but to hear him in his pomp, go back to an album like 1967’s Tom Jones Live at the Talk of the Town. Not all of the song choices on the LP have stood the test of time – ‘My Yiddische Momme’, for example – but I defy you not to attempt a tentative frug when the set-closing ‘Land of a Thousand Dances’ kicks in. 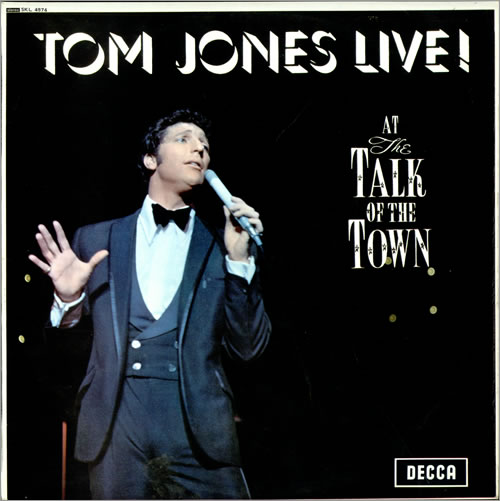 In contrast, Peter Jones’s book is constructed from a tired pile of press cuttings, statistics, chart placings and reviews, and telling us on every other page how red-blooded his subject is doesn’t make up for it. Exactly how much time the author spent in the company of the singer in preparing the book is impossible to know. The dust jacket notes that Jones, P has known Jones, T “since the early days of his success”, but the writer’s technique artfully hints at contact without fully revealing it. Take this passage, when Tom is apparently musing on the charged atmosphere of his gigs:

. . .he rarely spoke of the hysteria and the crowd chaos. ‘I always dreamed of being right up there at the top,’ he’d say. ‘It was what I always wanted. Now it’s happened and I still don’t think I can take anything for granted. There’s always the next show and the chance that something could go wrong.’

From the use of the conditional tense here (“he’d say”), are we to take it that the author actually heard him utter these words, or is he paraphrasing the kind of thing Tom said on more than one occasion? Or is it a press cutting presented to give the impression that the author is big mates with the star?

Actually, I’m not sure it’s worth worrying about too much, because I really can’t encourage anyone to read the book. Instead, let this article act as a prompt to seek out some period clips of Tom on YouTube. To kick off, here he is on the Christmas Day 1970 episode of his TV show, refusing to be phased by the prospect of a duet with Ella Fitzgerald – even if he does have to glance at the idiot boards more than once to check the lyrics of ‘Sunny’.