The Scene by Mike Jahn

First up, an admission: I bought this book neither having heard of Mike Jahn nor having realised the significance of its title. A terse description online, as a rock novel set in 1969 New York, was enough to trigger the purchase, but some further research opened up interesting new lines of enquiry and – not for the first time – revealed significant shortcomings in my own knowledge.

The book is subtitled on its cover ‘A Documentary Novel’, which in this case means that the author interpolates real and fictional characters within a very specific geographic and temporal setting. The story follows Lori Thomas, a groupie on the fringes of the music business, from grubby encounters with rock stars (subtly alluded to on close examination of the book’s cover illustration) through to genuine and apparently deserved fame in her own right as a singer-songwriter with a voice described as “a combination of Tina Turner and Joni Mitchell, if you can believe that.” Interspersed between the chapters of this account are three sections called Tapes 1, 2 and 3, which purport to be transcripts of interviews with a groupie, a press agent and a guitarist (though which are clearly invented). The Scene of the title is Steve Paul’s Scene, the New York music venue and club where “every night, there was the gathering of the musicians, the important ones and the ones who wanted to be important.”

The novel draws substantially on references to real places and people throughout. In places, it almost stops being a work of fiction at all. Early in a chapter introducing Gino Henley, a fictional psychedelic soul star who plays at The Scene – and who later has a significant encounter with Lori – Jahn writes, “Consider how you become a rock and roll star”. He then devotes a full nine pages to the early history of (actual) blue-eyed soul band The Rascals. 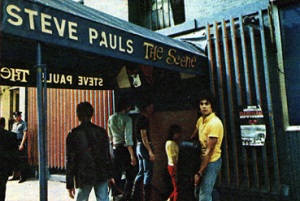 It was this curious blend of fact and fiction that encouraged me to tap ‘Steve Paul’s Scene’ into a search engine. And of course as I now know, it really existed: situated at 301 W. 46th Street, it opened sometime in 1964 and closed in 1970, having played host to gigs by The Doors and Jimi Hendrix, as well as countless late-night jam sessions with anyone passing through. There’s a terrific collection of posters from The Scene (including the one pictured below) and lots more information about the club’s history here. Mike Jahn, meanwhile, was the first rock critic of The New York Times and also wrote an early, highly-praised book on The Doors. So we can gather that he’s as well placed as anyone to write a first-hand account of this particular slice of rock’n’roll history.

The blurb on the front pages of the novel describes Lori as a “supergroupie extraordinaire. . .balling and crawling her way to stardom”. This is a harsh – if not actually inaccurate – judgement on Lori, though Jahn himself seems ambivalent about her. The author leaves nothing to the imagination in depicting sex scenes involving Lori, and there’s a particularly grim episode involving an English bassist called Nick St Joseph. (In fact, the British don’t come out of it at all well. At one point Jahn has Lori deliver the withering judgement that she’d “never seen a British musician who had a decent sized c**k.”) But in giving Lori a genuine talent as a songwriter and performer, it’s as if he’s trying to redeem her from the seedy stuff earlier on in the book – and perhaps himself too from having enjoyed the thrill of writing those titillating scenes which feature her.

Truly real 2: A mundane few weeks of listings from early 1969 at The Scene. ‘Lead’ Zeppelin are not a feebly-named tribute act.

Gino screamed and jumped into the air, straight up, as the brass let go this. . .shot. . .this shot of noise into the audience. When he came down he was facing the audience and this rumble was coming out of his guitar and out of his lips. He began to sing. The spade Mick Jagger. The spade space Mick Jagger. The audience rolled back in their seats with the first blast, and one girl gasped. Gino was moaning, rolling these fat words into the microphone while the bass rumbled and the brass blasted away in little chunks of energy. The girl who gasped was rocking her head from side to side, her eyes closed, a tear beginning to form.

In writing about Lori’s fledging career, Jahn has to go further than just talking about gigs by providing examples of her lyrics. And these are mostly credible, very much redolent of the kind of thing coming out of Laurel Canyon in the period:

You bring our lips together but our thoughts are drawn apart
You reach to touch the surface, but hate to feel the heart

The Door at The Scene, 1967. Power cables taped to the walls, amps stacked up perilously. . .in short, a health and safety disaster waiting to happen.

Lori finally triumphs through her success as a musician – a rare enough subject for a rock novel of the period, whose creative protagonists are invariably male. And in spite of the lascivious sex scenes, the thing to cherish about The Scene is its evocation of a time and place: the sweatiness of a club that really existed, and the thrilling, pulsating reminders of rock music in its infancy. To get the full flavour of the era, have a look at the clip below (in headache-inducingly poor quality) of Moby Grape in a September 1967 TV pilot called the Steve Paul Scene, with an introductory voiceover by Mr Steve Paul himself.