Poor Me by Adam Faith

Read any biography of Adam Faith – however brief – and you’ll find a thread running through it. It’s there in the first line of his first big hit; it’s cheekily alluded to in the title of this 1961 autobiography; it featured in the first question put to Faith by John Freeman in the famous 1960 interview for the TV series Face to Face; and much later, it was the subject of a column he wrote for The Mail on Sunday. If you can’t guess what it is, the opening titles in the clip below of the 1971-2 TV series Budgie in which Faith played the lead should give it away.

You’ll have realised by now that I’m talking about money. In Faith’s early career as a pop star, his earning ability was the subject of much speculation. In the Freeman interview, a transcript of which appears in full in Poor Me, Faith tells the host that the sum of his weekly earnings being bandied about by the press at the time – £1000 – was pretty much accurate. It’s almost impossible to get away from the topic of cash in Poor Me. As a 12-year old paperboy, Faith reports that he started off earning 7/6 a week, and at his first gig with a skiffle band (whose name was “something like the City Ramblers”), the organiser tells Faith that he’ll pay each band member 10/-. And so it goes on, from the £100 all-white outfit for the 1960 Royal Variety Performance, to the end of the book when he’s spending £6000 on a new house for his family and friends in Sunbury-on-Thames.

Though the book is forensically precise on the financial details, its content elsewhere is more casual. This early admission from Faith is hardly encouraging:

I’m not going to tell you much about my childhood for the best reason of all. I can’t remember it!

My memory is a bit of a joke in the family. Dennis [Adam’s oldest brother] always says that if something happened any earlier than last year, I won’t remember it!

At the time the book appeared, Faith was only 21, so his telling us he can scarcely remember his childhood is disappointing, if not entirely unbelievable. Elsewhere it’s clear that the circumstances of the autobiography’s creation are Faith sitting down with a fresh pack of Player’s Navy Cut while he tells the story of his short life to a ghostwriter. “Sorry I can’t keep everything in a nice tidy order,” he notes at one point, “but that’s how this book is being put together. I’m just talking about things as I remember them.” 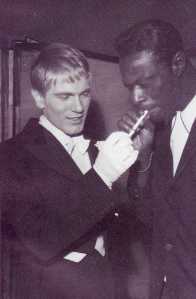 (From the book) With Nat King Cole at the 1960 Royal Variety Performance. £100 stage outfit not pictured.

Faith’s early media appearances made him a likeable character. He came across well in the Face to Face interview and his general persona George Melly described in Revolt into Style (1970) as “attractively modest and puzzled”. The book is, appropriately enough, a cash-in, designed simply to appeal to hoards of young fans eager to know more about their favourite star. But in spite of this, other depths to Faith are revealed, though not perhaps ones fully understood by the singer. He writes at length about his sorrows over a girl called Jane (not her real name, he tells us), whom he loves deeply but with whom a stable relationship doesn’t last. During much of the period of his love for her, Faith has trouble with his “nerves”, as he puts it. He goes to see a doctor who diagnoses overwork, but by that point in the book it’s pretty clear why he might be suffering. Long before the breakthrough with ‘What Do You Want?’, he spends all day working as an assistant film cutter in Wardour Street, and every night as a singer with bands in “the Espresso Belt”, the Soho coffee bars given over in the evenings to music. In the Freeman interview he acknowledges that he also once went to see a psychiatrist. When Freeman asks Faith why, his reply is calm and delivered with a smile on his face: “Because I thought I was dying.” The singer would only have been 18 or 19 when he’d made this appointment.

(From the book) Light entertainment at the end of the tunnel: Faith takes a break from panto rehearsals in Wimbledon.

Faith’s comments on his career are a reminder of the nature of showbusiness at the time. For example, he offers his final thoughts in the book from his theatre dressing room in Wimbledon where he has an engagement in panto. In preparation for an earlier summer season in Stockton, Faith tells us that he and his management team created bits of comic ‘business’ for his time on stage “to stop people thinking of [him] purely as a singer.” While it was the music which gave Faith his early success, the role model here is someone like Sammy Davis Jr, with whom Faith appeared in the 1960 Royal Variety Performance. Becoming an all-round entertainer was a career aspiration which would begin to evaporate for a lot of performers during the rest of the decade. Pop music would eventually learn to devise its own rules and become an end in itself, rather than an admission ticket to the broader stages of light entertainment. Later in his own career, however, Faith was occasionally sniffy in interviews about his music, and came across as someone who would have been happier if he’d had further acting opportunities.

‘Poor Me’ was the title of Faith’s second hit single, and the singer tells us he’s pleased with himself when he settles on it as the title for the book:

All I need is a title to get the story rolling. Maybe I could pinch one from one of my discs. How about POOR ME?

And of course, ‘How About That’ was the title of another of his hits. But let’s remind ourselves of Faith’s extraordinary vocal delivery on the 1961 single after which the book is named.

PS The final page in the book is devoted to a reader competition. If YOU want to win a portable record player, five long-playing records and the chance to meet Adam Faith, just tell us in 50 words (on a postcard, please) why you like the singer and his records, and return the coupon.

The original owner of my copy did exactly that. I dearly hope that she – or was it a he? – won.

That clipped coupon in full.