Back in the USSR: The True Story of Rock in Russia by Artemy Troitsky

One of my favourite books about the Cold War in Europe is Martin Walker’s Russia, an entertaining collection of the journalist’s columns for The Guardian from the period 1985 to 1988. In one of the articles, Walker writes about underground Moscow band Zvuki Mu, whose songs – together with those of Leningrad outfit Televisor – he believes the historians of the future will have to consider if they truly wish to understand the Soviet Union of the 1980s.

Martin Walker also provides the foreword to Artemy – or Art – Troitsky’s 1987 survey of rock and pop music in Russia. My guess is that Troitsky offered Walker his introduction to the likes of Zvuki Mu; Walker approvingly cites Troitsky as a key figure in the “far-flung and chronically disorganised” culture of Soviet rock. Troitsky’s task is a daunting one. He notes in his introduction that his work may be “unique among rock books in that very, very few Western readers have ever seen the people or heard the music they will read about here.” He also issues a disclaimer: this will be “a book of personal confessions, mine and my friends.”

The pioneering Troitsky begins by sketching out some early counter-cultural history and a short account of the stilyagi, an early-1950s youth cult devoted to big band swing who stood out from the crowd with their quiffs and outlandish jazz-era clothes. It’s impossible to imagine quite how brave and shocking this must have been on the streets of Russia in the bleak aftermath of the Second World War, and unsurprisingly, there were plenty of people of who didn’t care for them. Individual stilyaga might be humiliated by having a lock of hair, or worse still the bottom of their tight-fitting trousers snipped off.

Troitsky traces what he believes are the earliest Soviet rock bands not to Russia, but to Latvia and Estonia (respectively, The Revengers, formed in 1961, and The Juniors, formed in 1963). It’s an indication that the reference to the USSR in the title of the book holds more significance than the obvious musical one. Troitsky’s first visit to the Estonian capital Tallinn isn’t until 1975 but when he gets there he’s bowled over by what he finds: a healthy, diverse rock scene which “had been more or less painlessly integrated into the artistic life of the republic.” 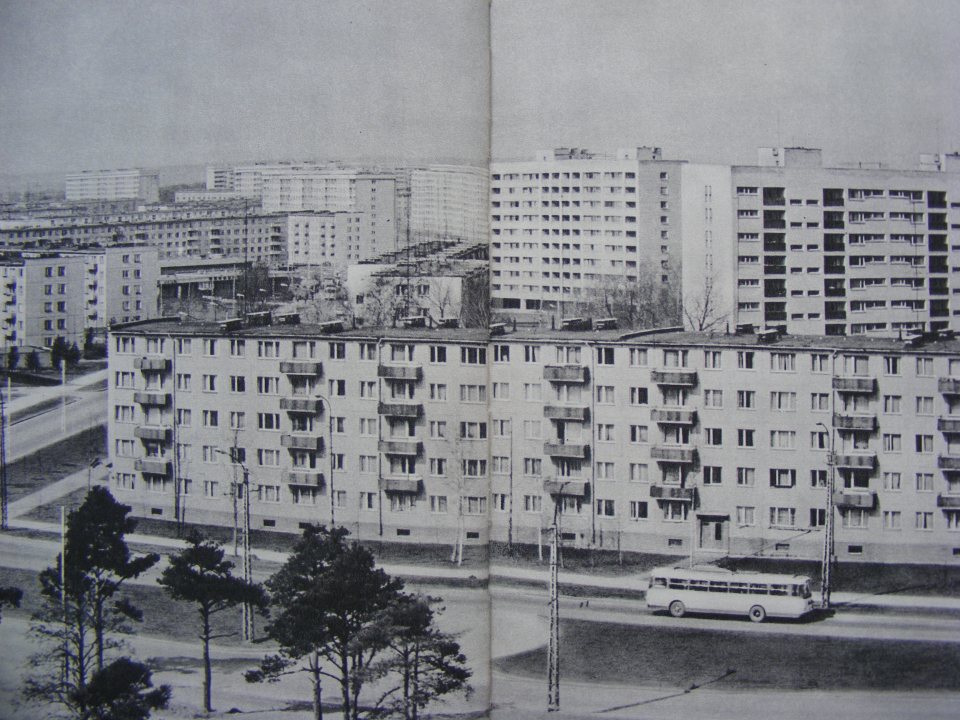 Tallinn, 1975: What strange new sounds might emerge from such a place? (Image taken from Tallinn by Erik Raiküla, 1975.)

Back in Russia, the process of cultural expression is a more challenging one and the clash between independent musicians and the heavy hand of officialdom is a running theme. The metaphor that emerges as you read Troitsky’s account of the Soviet rock scene of the 1970s and 1980s is of a cracked mirror showing a distorted reflection of Western pop norms. Yes, there were regular festivals for bands, but these always had their own judging committee to find the best song or act. Since the state record label Melodiya (which Troitsky delightfully describes as “flabby”) routinely ignored the most interesting new bands, fans pieced together and shared tapes of their favourite sessions and gigs, either with or without cover artwork, resulting in ‘albums’ that existed somewhere between bootlegs and official releases. And even in the Russia of the mid-1980s there was a revival of an earlier musical age when a number of bands unexpectedly brought back polkadot dresses, pointed shoes and the twist.

Much is made of the need for Russia to develop its own musical identity. Watching the antics of a performing Finnish band at a gig in Moscow in 1985, a Russian performer resignedly tells Troitsky that, “We just can’t breed bands like this,” before going on to explain that, “It’s not even because it would be forbidden. . .we just cannot be like them.” In the earliest days of Russian rock, a band might be booed for singing in its own language, Russian being seen as a marker of conformity. Ironically, as the scene develops and bands start singing in Russian, it is the lyrics which give the bands’ songs their distinctiveness. Troitsky notes that the words are more important in Russian rock than its Western counterpart, and tend to be both more literary and challenging in nature. He uses the term ‘bard rock’ to describe the music of Time Machine and other popular bands from the 1970s who write elliptical lyrics about social passivity, conformism and hypocrisy. 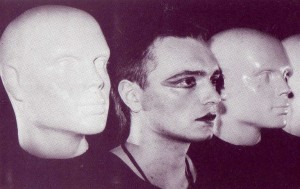 (From the book) Kostya Kinchev of Alisa: Baffling the teenagers of East Anglia since 1985.

Of course, after reading all this, I had to listen to some of the music in question. Troitsky recalls that numerous articles and programmes about rock in Russia appeared in the West in the years 1985 and 1986. I’m sure I caught at least one of these pieces on television at the time. Though I had no idea what they were singing about, the band I saw was clearly combining elements of art rock, new wave and performance theatre to create an utterly baffling whole. “That’ll never catch on,” I remember thinking, in what was for me at least a typical display of teenage musical prudishness. More than 25 years later, I found a copy of the compilation Red Wave – Four Underground Bands from the USSR, a double album released in the USA which featured songs from four Soviet bands of the 1980s. The four bands in question are Aquarium, Alisa, Kino and Strange Games. These are some extracts from my listening notes:

As much as this might suggest I don’t necessarily get it, I can certainly see the attraction to this stuff. Its oddness and unpredictability is intriguing, and the grim circumstances in which much of it was made only adds to the fascination. In a piece written last year for The Guardian to promote the publication of his book Retromania, Simon Reynolds describes Soviet new wave as “the latest crush of Los Angeles cool-hunters” like Ariel Pink and Puro Instinct. The two acts have even collaborated on a song called ‘Stilyagi’.

Reynolds’ wider argument concerns our contemporary insistence upon excavating, burnishing and exalting every last artefact of yesterday’s popular culture, even when those artefacts may not be worth the effort. Art Troitsky couldn’t have foreseen the rediscovery of the acts he wrote about in the last days of the Soviet Empire, any more than any other cultural commentator did; as a 15-year old watching television in suburban Norwich in 1985 I certainly didn’t. But for Troitsky and the bands who blazed the musical trail described in this book, the challenges of the present were enough.

PS While researching this article I found several stories dating from 2011 stating that Art Troitsky, still a successful critic and writer, was about to go on trial in criminal proceedings brought against him by – of all people – a Russian rock star. Troitsky had criticised musician Vadim Samoylov in a television documentary exploring links between the music world and the Kremlin. This piece from the Index on Censorship website is a good summary. 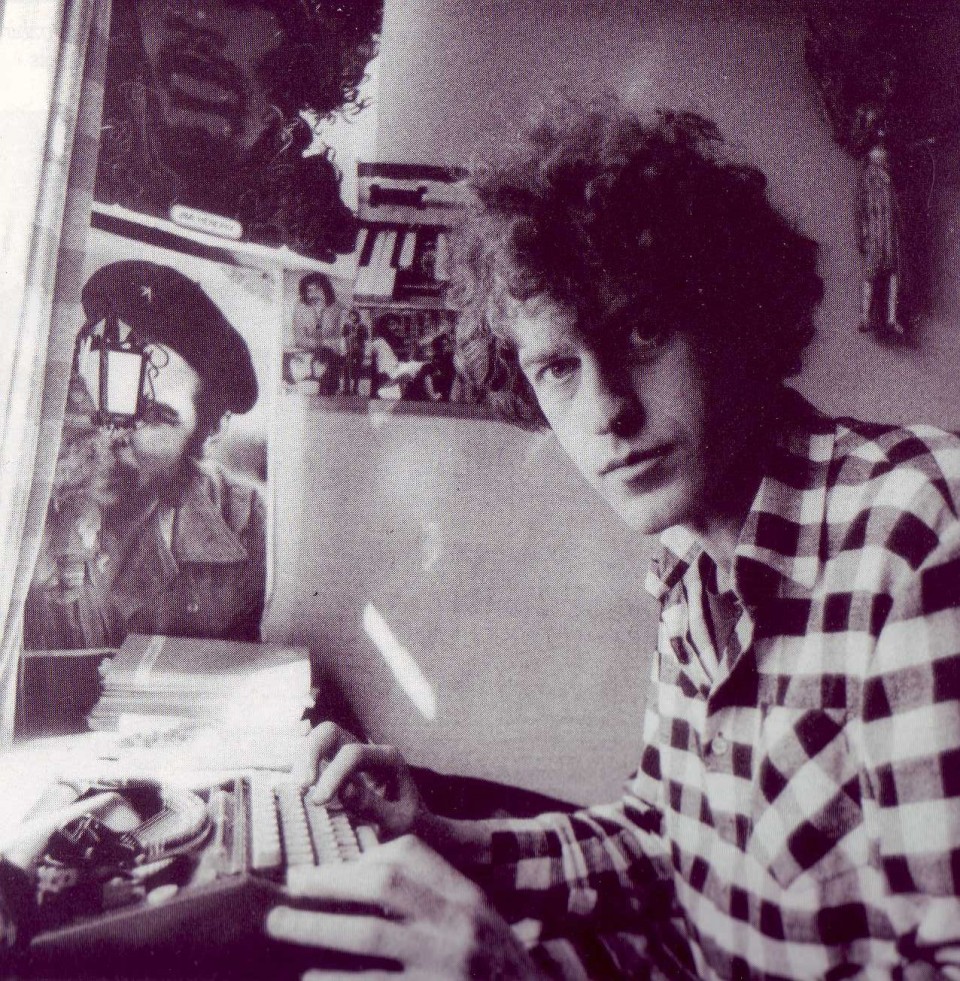 (From the book) Troitsky at work. Note the author’s own ‘revolutionary’ heroes.

The most recent update I can find indicates that the trial was to be moved to June last year. If anyone can provide any more information on what happened after this, please use the comment facility below.